Getting work-place experience is vital to building your career.

Students from TIV are gaining that experience through Amrick

Learning job-ready skills through building and construction courses in Melbourne such as those at TIV is an important first step for many builders, carpenters and tradesmen entering the industry. The next step is to gain solid hands-on experience that puts the skills learned into practice in the real world.

For many starting out in the industry, this can be a challenging and sometimes high risk process. Finding work is not always easy, and once in work, a decent standard of training and pay are sometimes lacking.

TIV’s growing relationship with specialist contract labour company Amrick is changing the way promising building and construction professionals can build their careers. The two organisations are working together to provide TIV students with paid employment while they undertake their TIV trade courses. Through Amrick, Stefan has improved his skills on a wide range of jobs

Construction training through TIV has not only helped budding carpenter Stefan Kolosov grow his skills; it has led to ongoing work with Amrick and a promising career path.

Stefan, who has been undertaking building and construction courses with TIV since early 2015, is now using the days he’s not studying to work on a wide variety of paid, hands-on projects through Amrick.

Amrick operates like a recruitment company for the building and construction industry, meaning work is secure and varied. Amrick’s advanced way of thinking provides other benefits.

“Finding work was difficult before joining TIV opened up this opportunity,” Stefan says. “When staff from Amrick came to TIV and spoke to us, what they were offering sounded too good to be true. I thought: ‘There must be a catch!’ It has turned out really well though. What I like about Amrick is the consistency of work and pay and their approach overall. Your wage arrives in your account every week and you’re treated really well. There’s a strong emphasis on health and safety and you’re looked after as a worker.”

Through Amrick, Stefan has also been able to use his construction training and carpentry skills on a range of different projects, improving his abilities as an “all-rounder”.

“The first job I did was a frame, but I’ve also worked on a heritage home with a modern extension and a quite a few other jobs.”

“My prospects have definitely improved through both TIV and Amrick,” he says.

These are hands-on building and construction courses.

Jason Pickles, business development manager at TIV, says collaborating with an outfit like Amrick has really added to TIV’s building and construction courses.

“We’ve been approached by a lot of companies looking for staff from our construction training programs but we’re quite strict about filtering out the good from the bad, as some employers out there don’t treat their workers very well. So when an employer approaches us, we’re sceptical at first. This is because we’re committed to protecting our students as much as we can. Amrick have shown themselves as different from many other employers; they are really committed to their workers.”

“When Amrick contacted me saying they needed carpenters, we invited them to come and have a look at our facilities and check out what we’re about. I think they liked what they saw and they felt that our approach was similar to theirs, which is about investing in students with a long term view of ‘giving back’ to the building and construction industry.”

“Amrick now employs a number of TIV students as workers and the students are very happy with their experience. At the same time I think Amrick is also satisfied with students’ level of ability and overall attitude.” 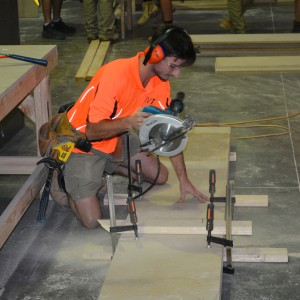 Paid building work experience with Amrick whilst you study building at TIV.

Matt Aristizabal from Amrick agrees that his buisness shares a similar vision to TIV, which is one reason why he believes the two will continue to work together successfully to invest in students from TIV’s trade courses.

“We were looking for carpenters so I went in search of a training provider to help us. In line with our company’s philosophy of a ‘fair go’, we’re also very committed to helping encourage and build good workers; we see it as an important contribution to the building industry and in the end to the community. So if TIV could help us and we could help them, we saw this as a win-win for everyone.”

Matt says on visiting TIV he was immediately struck by TIV’s facilities, approach to learning and student care. “I spoke to the trainer there, Bill (Will Spencer) and was impressed by how well they look after their guys.”

“We’ve now got seven or eight students from TIV building and construction courses working for us on a range of projects, mainly in the carpentry area. We contract guys out to builders and they generally get to work on a decent range of projects.”

“We’re also committed to getting the best for our candidates, the TIV students. We do safety checks on all our clients and we pay the guys every week. In fact we make sure they’re paid above and beyond. We believe it’s in our interests to ensure a happy workforce. In that sense we’re playing a long game by investing in the next generation of workers.”

“It’s really for that reason that TIV stood out for us. The language on their website and their overall approach show that they share our values.”

A high standard of training

Matt says that he’s impressed with the standard of students at TIV.

“I’d say it’s very good. The ones that have gone out on the tools have all done really well. They are also good all-rounders. It’s often the case where a guy has learned the job with a builder that he is really only skilled in one area of carpentry. The guys from TIV’s building and construction team are generally confident with most aspects of carpentry, from framing to finishing a wall to skirting, site set-up and level checking.”

“The standard of the guys at TIV and their commitment to the work were impressive and we’ve found that clients have been very happy with the work delivered. This has a positive effect for all concerned as we’re always keen to place students studying at TIV.”

“TIV’s facilities are a key component of this. And in fact, the students have even been involved with building part of their facilities in Footscray, Melbourne, where they knocked up some frames for the basic structure.”

While Matt says it’s too early to comment on client outcomes over the long term as the students have only been in their placements for a number of weeks, early signs are promising.

“The guys are generally getting good feedback from the clients. And I think it’s very clear to our clients that we’re doing something different.”

“From our point of view, we like placing TIV students because most of them are pretty committed and serious. We prefer driven workers.”

Because the TIV building and construction courses require them to study three days a week, we’re placing them a day here and a day there with a wide variety of clients. We’re pretty confident we can match the right worker to the right client.”

Matt says that by working with TIV on placing skilled and driven workers, the company is making a real difference.

“The immediate benefit is that we can draw on a high volume of skilled workers. The long term benefit is that we’ll have strong relationships with a load of highly qualified tradesmen. From their point of view, once they’ve completed their studies, we’re confident that we’ll be able to place them in ongoing employment. And they’ll keep coming back to us. They’ll remember us as the guys that helped.”

Stefan’s development as a carpenter shows that TIV and Amrick are on the right track.

“I felt pretty uncertain about the future when I first started out. Since starting at TIV and now working through Amrick, I feel much more confident about my future direction.”